As members of the Anthony Braxton Quartet quartet during the 1980s and early ‘90s, Marilyn Crispell and Gerry Hemingway – along with Mark Dresser – were primary conduits of the rapid evolution of Braxton’s music during this period. During their tenure, Braxton introduced collage form structures, pulse track structures, and other strategies that simultaneously promoted independent creativity on the part of each musician and new modes of interplay within the ensemble. At each concert, each musician would have upwards to 200 pages of music on their stands, and the latitude to bring any of them into the performance at any moment. (from Bill Shoemaker's liner notes of Affinities - the first of two duo recordings on Intakt Records)

New Release for May of 2015 on Intakt Records: 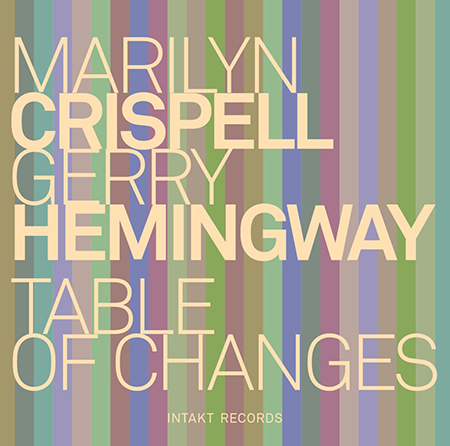 Anyone reading this likely knows how much history and affinity there is between pianist Crispell and percussionist Hemingway, not just their obvious connection in the Braxton quartet but through long experience as a duo, both in live performance and on record (like their previous date on Intakt, Affinities). Crispell, no stranger to percussion duos, and Hemingway did a number of dates across Europe during 2013’s festival season, and Table of Changes gives a good accounting of what they were up to on several of these dates, presenting the range of their individual and collaborative languages.
Things are tense and muted at the outset of “Spirings,” which unfolds with prepared piano, low thudding, and spider-walk lines that lead into rougher and more spiky territory. Even in these opening minutes, we’re reminded of the power of this pairing, as they locate tasty contrasts in both texture and tonal register even in the thick of intense energy. At times they linger in one of these areas, as in the absolutely gorgeous “Waterwisp,” where Hemingway creates a wet finger on glass drone with his vibes, met with brilliantine lyricism from Crispell, who also knows just when to play a single, oh-so-apt lower register note, like a stone into water.
Many of the pieces seem to me about subtle moments of transmutation, the breaking down or coalescence of things found in nature. The soft toms and cymbals of “Roofless” sound like a darkening atmosphere that erupts with Crispell’s jabs and flurries, which almost escape gravity. The lovely ice fragments and shimmering vibes on “Night Passing” seem to push into the kind of Bley-derived dark rhapsody that Crispell has often explored lately. “Windy City” is especially effective in this area, moving from lush abstract ballad – where Hemingway lays cross-cutting patterns against a chord progression that sounds both inevitable and wholly spontaneous – until Crispell boils down her playing to a single low note, while Hemingway deconstructs his kit until he can only vocalize into a drum head.
It’s a detailed, absorbing program of music. But to my ears, the very best stuff is on the last third of the disc. “Assembly” is a percussive vibes piece, with Crispell and Hemingway interweaving spiky and spacious lines with taut intervals. There’s a sheerly beautiful reading of “Ev’rytime We Say Goodbye,” which the duo approaches via long abstraction, even if it’s heart on sleeve throughout. And the rousing closer sounds as if two Crispells are playing at once, skulking left hand and probing right, with Hemingway shadowing a micro-second behind, creating tension expertly. It’s a glorious hour from two of my favorite musicians, filled with lovely and unexpected moments.
–Jason Bivins

Anything can be told about a piano/percussion duo. But when the acting constituents are connected via the invisible knowledge of all the parts forming an improvisation – well before it materializes as a resounding series – that is the moment when the chaff is discarded and the excellence remains.

That Crispell and Hemingway are long-time friends and artistic partners definitely helps. The sound truly reflects the vital principle of a profound exchange touching on assorted topics, with varying levels of rumination. Musicians gifted with sensible wisdom: even the “spirited” episodes offer the type of rewarding comprehensibility that defines an intelligent translation of many-sided intuitions into concrete acoustic interaction.

All which is heard – in synthesis, a collection of live fragments logically assembled into a whole – is entirely manageable: a huge distance separates every minute of the interplay from any semblance of rhetorical accent. The pair listen to the vibrating air, listen to themselves; they know that we are listening, too, in search of a secret key to decode the complexity of something that, on the contrary, is extremely simple to grasp if only one wants to try. Their investigations appear natural, unpretentious; for the most part, the results escape from inquietude to find asylum inside the realm of a pensive composure (“Night Passing” and “Windy City” being the clearest exemplification).

Articulation and luminosity in union with rational consideration: one can’t ask for more. Top-rank materials, to be preferably savored in total presence of mind; in case of extraneous forces contrasting the achievement of that condition, this music will surely facilitate the opposite process.

John Fordham from the Guardian writes:

With Affinities in 2011, the partnership of former Anthony Braxton players Marilyn Crispell (piano) and Gerry Hemingway (drums) produced improv-duo music of power, precision and lyricism. Table of Changes is another live album, drawn from four dates on their 2013 European tour. The tracks are all originals, highlighting the players’ emotional as well as technical range, with the only cover being Ev’ry Time We Say Goodbye – interpreted in solemn, spacey chords and percussion tapestries until the melody coalesces at the end. Crispell’s strength, decisiveness and energy often surface in the turbulent chordwork that rolls and rings against Hemingway’s needling cymbal sounds and pummelling drums, but she’s as likely to float glistening treble tones over the drummer’s vibraphone glow or the pings of finger-cymbals. The dreamy and then darkening Night Passing focuses on Crispell’s use of space and harmonic sophistication; Hemingway’s rubbed-metal sounds and ghostly nasal singing emphasise the title implications of Windy City while Crispell rhapsodises classically. It’s an uncannily attuned partnership. Marilyn Crispell and Gerry Hemingway

The duo performed at the 20th Vision festival on July 8, 2015 in Judson Church, NYC 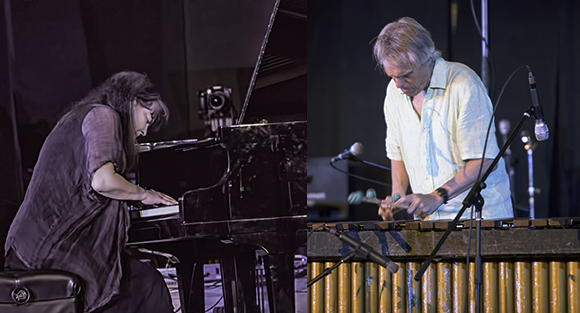 John Sharpe from the NYC Jazz Record on the July 8, 2015 performance at the 20th Anniversary Vision Festival:

Pianist Marilyn Crispell and percussionist Gerry Hemingway conjured high drama in a wonderful duet that bore testament to their 30-year-plus association. Crispell’s thunderous clusters and sinewy probing drew an abrupt rat-a-tat response from Hemingway. But then, in an electric about-face, the potency dissipated to leave an enthralling exchange of crystalline droplets and sighs rubbed from the skins of the drums. In an unspoken tribute to saxophonist Ornette Coleman, whose demise hung heavily over the festival, Crispell later referenced Coleman’s gorgeous “Broken Shadows” in an invention alternately hymnlike and tumultuous.

Here below is video I posted on You Tube of the duo performing in 1995 at Merkin Hall in NYC. I synchonized the one camera documentation with a professional recording by engineer Jon Rosenberg. Enjoy !!

Here below is an excerpt of our duo performance from the 2013 Ulrichsberg Kaleidophon. Some of the material from this concert (not heard in this video clip) is part of the release on Intakt "Table of Changes"

Some of the material in this posted clip below is better heard on our duo CD "Affinities" This was an audience member's documentation... 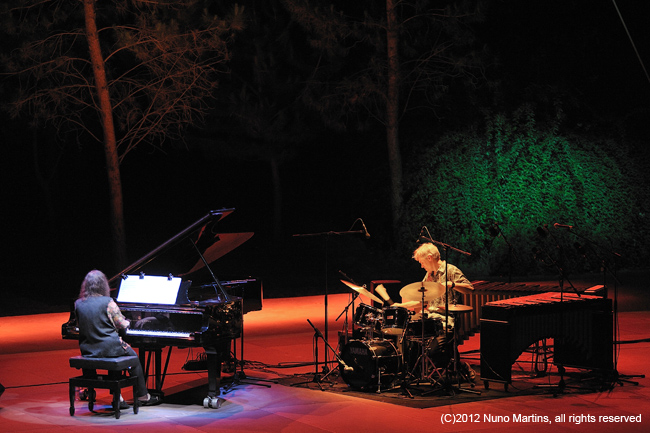 email me: gh (at) gerryhemingway (dot) com for booking 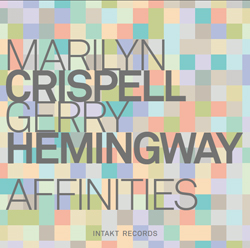 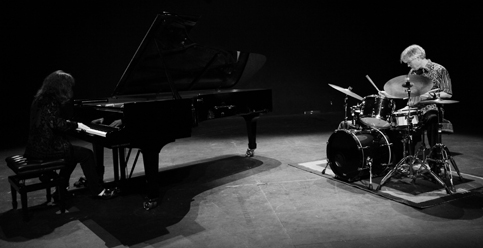 For Saturday night was reserved one of the most memorable nights of music from this year's festival duo Marilyn Crispell (piano) and Gerry Hemingway (drums, percussion, vibraphone, marimba) was responsible for a perfect musical dialogue based on improvisation: besides demonstrating an absolute domination of their instruments, Crispell and Hemingway revealed an almost telepathic [understanding]. Having worked together since the time they joined the Anthony Braxton quartet perhaps the most solid group of the saxophonist's career, Marilyn and Gerry developed a very strong musical relationship. We enjoyed the fruit of a magnificent musical understanding between the delicate piano and laboriously detailed Crispell (who never lost her melodic sense or harmonic coherence) and percussion accurate right down to Hemingway (who along with the drums played the marimba and vibraphone always impeccably) . Elegant, refined, rich music the duo created from the union of poetry and freedom. Nuno Catarino 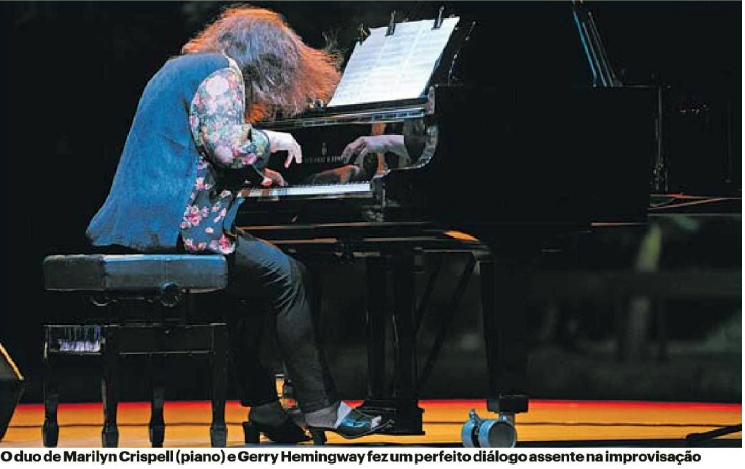 The remarkable pianist/composer Marilyn Crispell has become a whittler of delicately detailed contemporary miniatures recently (notably on Vignettes, for ECM) after 15 years negotiating the stormy waters of Anthony Braxton's music. But this live recording, mostly from Crispell's native Baltimore in 2009, finds the pianist back in spontaneous synchronicity with former Braxton drummer Gerry Hemingway, and it's much more of a balance between her reflective and intensely full-on playing. On the 14-minute Shear Shift, Crispell fires brittle chords, clipped runs and low-end rumbles into the path of an abstractly swinging Hemingway, and the two establish a heatedly seamless flow before the final delicately resolving meditation. Axial Flows pings and gleams in a playful trance, and Starlings is at first a darting exercise in dampened piano notes and pattering percussion, turning into a powerful, Cecil Tayloresque free-jazz piano outburst. Churning train-like rhythms drive the furious Threadings, but the harmony-investigation Permeations gets close to the dancing touch of Chick Corea by the close. After a long break from each other, Crispell and Hemingway once again sound joined at the hip. John Fordham

With so much shared history it should be no surprise that pianist Marilyn Crispell and percussionist Gerry Hemingway prove so well attuned to each other's moves. Both came of age as key parts of Anthony Braxton's legendary late '80s/early '90s quartet and have since confirmed themselves as masters of their craft. Over the nearly two decades since they left Braxton, reunions have happened sparingly. Assembly from two live dates has enabled creation of a program that coheres in satisfying fashion, comprising six unscripted collaborations and one cover. Crispell unites opposing facets of her expression: the Cecil Taylor-inspired piano-as-tuned-drums mode and the airy romanticism revealed on her late '90s ECM sides. While both get an airing it is the former which predominates, as the pianist at times evokes multiple voices, such is the independence she bestows upon her separate hands. Hemingway, while an equal partner, proves thoughtful and supportive, driving and commentating, not keeping to set patterns, always probing and varying textures as he expands and contracts the pulse.
At times they manifest as sides of the same coin, thrilling in their hand-in-glove syncopation, as on the powerful opener "Shear Shift", where Crispell's sparse hammered phrases find an answer in Hemingway's insistent tumbling muscularity. They explore a similar neighborhood on "Starlings", but arrive there after an opening that displays their sensitivity to texture and sound through a convocation of dampened piano strings and vibes. "Axial Flows" further accentuates the percussive aspect of the duet through the entwined chiming of the vibes and piano. Frank Kimbrough's "Air", a sobering pastel ballad, contrasts starkly with the preceding spiky "Threadings", where Crispell weaves darting piano figures around the drummer's asymmetric groove. Ultimately the pair transcend their instruments in a superb twinning where preternatural communication is allied to unfettered imagination. John Sharpe, NYC Jazz Record