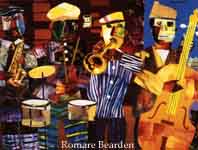 "It's an extraordinary band, one that seems to pick up the free jazz tradition and infuse it with a needed brilliance and vitality. There may be some irony that this group dominated by Braxton graduates plays a blend of hard bop and free with an authority unmatched by later members of the Blakey school. The intensity and invention never let up, but what dominated was a kind of absolute authority and devotion to the basics of swing."
Stuart Broomer (Victoriaville Festival '98) - Coda Magazine - September 1998 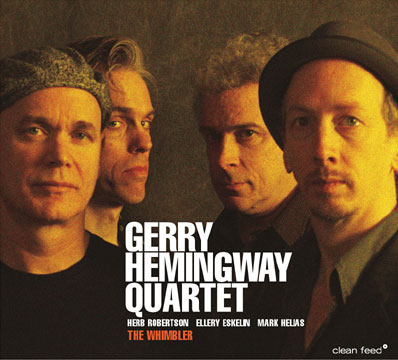 "...the key to The Whimbler is that it never loses its identity. Whether strictly written or free and occupying all points in between, the album retains an identity formed by its collective spirit. The Whimbler is a standout album from 2005 and should not be missed for those listening on the fringes of bop or all the way through free improvisation. Bridging the gaps and presenting a standout album, Hemingway has done a spectacular job." Michael McCaw AAJ

The Quartet's present lineup which started as of 2004 includes Mark Helias or Kermit Driscoll on electric and acoustic bass, Herb Robertson on trumpet and Ellery Eskelin on tenor saxophone. At the end of February '04 we performed in Portalegre, Portugal and a few days later recording a new record for the Portugese label, Clean Feed. The recording was released in May of 2005. See Tours for upcoming performances in the US and Europe. Here are some links to reviews of this disc, OneFinalNote, AllAbout Jazz-Michael McCaw, AllAboutJazz-Mark Corrato, AllAboutJazzNY-Kurt Gottschalk, AllAboutJazz-Derek Taylor , Bagatellen. 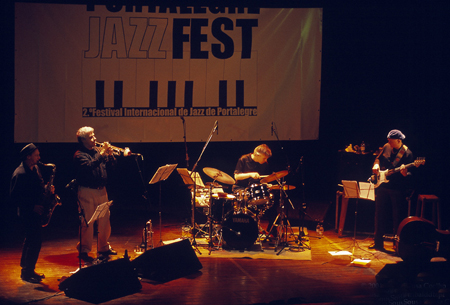 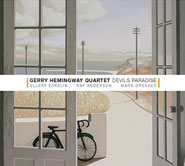 "Devil's Paradise" the studio recording of the Quartet (w/Ray Anderson, Ellery Eskelin & Mark Dresser) made in 1999 after the group had been touring extensively in the US is released on Clean Feed Records of Portugal as of May of 2003.

"Devils Paradise is about as good as it gets, with inventive compositions, fabulous solos, and very tight interplay." Steven Loewy All Music Guide

"The tunes are solid and the solos rip. What else do you really need?" WH Paris Trans Atlantic Monthly

"Johnny's Corner Song" is back in print as of March, 2003. See How to Get Recordings for details.

The quartet has upcoming performances in New York and Princeton, NJ in March 2009

In 1985 I recorded the first record for what was to become my working quintet. The group began touring and recording regularly in 1989 and produced a string of acclaimed recordings for the HatArt and Random Acoustics label. My only frustration with this wonderful band was the impossibility of touring in the United States & Canada. Three members of that quintet were based in the Netherlands and always the formidable cost of bringing them over never could be achieved.

I had for some time been planning to develop this American based group, modeled in part after the very successful quartet CD for HatArt produced in 1991 called "Down to the Wire" which occured only because the fifth member of the quintet was taken ill. On bass in the quartet is my longtime partner in crime (29 years!!) Mark Dresser. He is the only carryover from the quintet which he joined in 1990. Mark is a very special musician as the San Diego Reader aptly states ".......He has proven to be one of the master bassists of modern jazz, perhaps even the most exciting......... the luxuriant tremolos of his arco passages and refrains, were as identifiable as the calling cues we associate with elder bass paragons." Michael Formanek with whom I have worked for many years in many contexts, most frequently with James Emery has also frequented the bass chair. The Village Voice has noted his "...deep propusion, big beefy tone, a strong sense of line, individuality expressed through avoiding the expected." We were joined with the highly accomplished Drew Gress, played our European tour of 1999. His work in a quartet setting with Ellery Eskelin for many years in the 80's brought a natural cohesion to the musical invention.

On tenor saxophone is Ellery Eskelin hailed as the most inventive American tenor player in creative music......."(Downbeat Nov. 1996). Ellery is occassionally unable to make a performance and in this case his primary substitute is the Köln based tenor saxophonist, Matthias Schubert.

Sharing the trombone chair are two busy and illustrious trombonists including Ray Anderson whom I have worked with for over twenty-nine years mostly in the context of BassDrumBone. He is acknowledged as one of the world's greatest trombonist having won the Downbeat poll numerous times. Ray is featured on the CD "Devils Paradise" on Clean Feed Records. On the recording of the quartet made in the fall of 1997 'Johnny's Corner Song", and surely to appear again with the quartet is the equally kudoed Robin Eubanks. Among his many gifts is Robin's profound understanding of complex rhythm which I call upon in alot of my compositions. "You can't accuse Robin Eubanks of playing it safe...the forward-looking trombonist is stretching the canvas, sprinkling in new blends of colors to craft an imaginative work of art." CD Review.

More recently and since the groups inception for performances and European appearances I have been very fortunate to have trumpeter Herb Robertson whom I first played with in the context of Mark Helias' band (hear "Split Image" on Enja). His appoach to the trumpet is a wonderful match with Ellery's sound (they first worked together in a band put together in the late eighties by drummer Phil Haynes). Windplayer Magazine makes clear that "Robertson has always been a virtuoso of plunger and mutes - no anemic Bubber Miley imitations here....the full range on brass sound with startling elasticity". In April of 1999 we had four performances in the midwest with Paul Smoker as our guest artist in the brass chair.

In March of 1998 I released a live recording of the quartet from our European tour in November '97 in Europe. It features Robin, Ellery and Mark & myself in a concert given in Groningen, Holland and is on my own Auricle Records. The cd is still available on this site and on future gigs. Clean Feed released a studio recording of the quartet in May of 2003 "Devil's Paradise", with Ray, Ellery and Mark Dresser made after one of the group's peak touring periods (1998). For the story about our forty gig tour in the USA, have a look at this. The quartet with Herb Robertson and Mark Helias which is the current formation released "The Whimbler" in 2005 again on Clean Feed recorded in February of 2004. 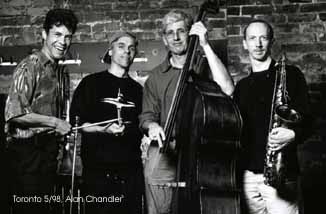