Multimedia Work - which is also a part of my solo work is detailed here.

After many promises, announcements, tales of great efforts (and there were great efforts - it just turned out to be a much longer process to achieve what I envisioned) I finally published a major chapter of my lifelong work as a solo artist. (release date February 18, 2014).

Here is a short promotional film about the film," kernelings" which is the main event of the DVD side of this two part program (click here) and here you can find excerpts from the CD of this 2 disc set (click here)

excerpts from the liner notes:

In the arena of what matters to me as an artist, the platform of solo performance is where I remain most willing to risk failure in order to touch a new possibility. The potential of musical risk also co-exists with the patient development and refinement of a language that is singular to what I am compelled to express with my instrument. Since 1974, when I first embarked on what was then a relatively uncharted domain of musical practice, most of my models for solo music were not practitioners of my instrument. Chief among them was Leo Wadada Smith, who represented a mentor in the early stages of my development. His solo performances and that of many other composer/performers in the early seventies were hugely inspiring to me. Everything seemed possible.

Different streams of output developed progressively over the years. At first multi-instrumentalism attracted me, as it was clear that as a percussionist I had many ways to explore color as a central aspect of my music. Partially for practical reasons I reduced this expansive palette of instruments by authoring my own library of extended techniques, limiting my instrumental choices to a basic drum set and a few small metal and wood objects that I could combine with my drum set. Eventually I added various forms of electro-acoustic elements, ranging from tape (pre-ordained material), to live processing to midi-controlled sampling.

This solo release took a lot longer than I expected to complete. The four prior solo releases (Solo Works 1982, Tubworks 1988, Acoustic Solo Works 1996, Electro-Acoustic Solo Works 1996), were aligned with what was current in my thinking in those years and I have occasionally returned to these earlier works in recent performance as well as teaching practice. They were, generally speaking, quite often shaped in great detail by my formal tendencies as a composer. In more recent years I have leaned more to my instincts as an improviser in solo performance. The process of developing this material was largely born of spontaneous invention, sometimes fine tuned through repeated attempts (the present day composer in me also refuses to die). I recorded much of this material many times, both in performance and in my own home studio environment, arriving here and there with musical places that felt complete. Perhaps it's the natural distillation of the underlying content of whatever I am trying to express, the "melody" so to speak. As you will hear I tended towards simpler and simpler material through which my musical identity becomes more transparent.

The film "kernelings" had an initial premiere as a work in progress in October of 2010 at the Antwerp, "Follow the Sound" festival. At the same time I also premiered my initial performance collaboration with the visual artist Beth Warshafsky in an extended work entitled "Behaviors". Here I threaded together a sequence of acoustic and electro-acoustic solo works in a theatrically-lit concert setting that highlighted my physical movement as performer. The collaboration with Beth more recently began to explore a real-time interactive format where what I play visually is part of the content of what you see on screen and in turn also influences my musical choices.

"For those who have been following the drummer's impressive legacy in progressive and avant-jazz stylizations, you get to see and hear an atypical part of his artistry. His breadth of scope channeled through the viewing glass of art shines throughout this radical reformulation of standard solo drumming fare, amalgamated with his off-center filmography and a penchant for broadening his horizons. " 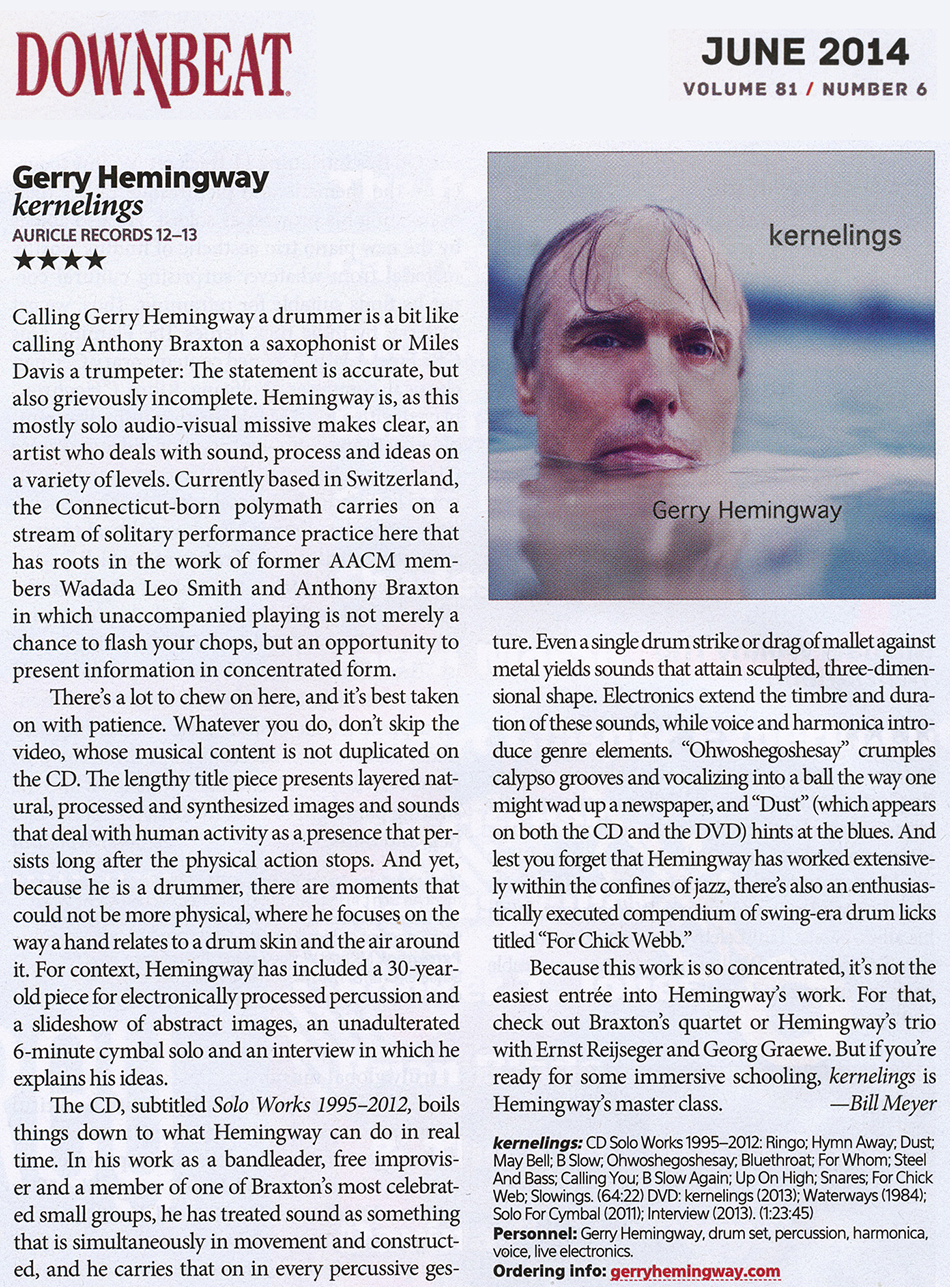 
Invention From an Afternoon - Solo Performance from January 26, 2015, LaSalle College of the Arts, Singapore 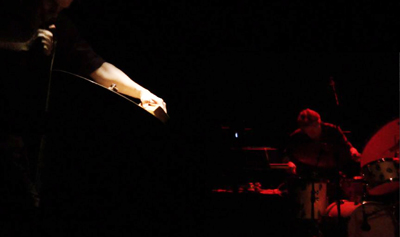 My audio-visual collaboration with Beth began in the 1980’s with a number of short standalone video works. More recently we began to explore her visual work integrated with my solo performance. The Behavior’s program has grown steadily starting from only the first and last pieces of this evening’s program  which are with pre-composed video. In the past two years we began to explore interactive work and Beth has worked with several developers (Matthew Ostrowski & Taezoo Park) to build a dynamic interactive instrument where the music and movement of my performance interacts with what is projected, and with what Beth chooses to include visually as she listens to the performance.

Some of you may be aware of the solo records (that's actual vinyl, remember magnetic needles?) that were released in the '80s. The first was "Solo Works" released on my own Auricle Records in 1980 (still in print and available through this site) and later "Tubworks" which was released on Sound Aspects in 1988 (now available as a remastered CDR from this site). There are also two Cds, each comprised of works from between 1983 and 1995, one purely acoustic and the other solely of electro-acoustic work. (see Recordings)

"Solo Works"- (vinyl lp) was recorded by Dean Roumanis in 1980 in New Haven, Connecticut, with the high end analog equipment of Mark Levinson. It is comprised of four compositions, including a fully scored work (see Nagual Music) for trapset entitled "Black Wind" which concentrates on sounds created by combining cymbal and drum resonances. Also featured is a work by composer/bassist Mark Helias called "The Heming Way", which as I recall took me months to master all it's polymetrical layers. Composer Earl Howard has his first documented work included here, "C & D". It is a piece constructed from a rigorous process of cataloging my entire repertoire of extended techniques. Finally a work for tape in the classic concrete style, realized in the summer of 1980, "The Dawntreader" complete's this first solo record. The material for that piece is culled entirely from barely audible sound techniques that were mostly ineffective in performance but rich material for tape manipulation. (still available through this site only)

"Tubworks" is a program of acoustic solo works for the trap drums. I developed & toured most of these compositions between 1983-5. Most of these recordings were engineered by Dean Roumanis at his home in the summer of 1985 using the M.L.A.S. rebuilt Studer analog recorder. The record opens with "Four Studies for Single Instruments" which successively explores a wide pallette of sonic material for the snare drum, hi-hat, bass drum and cymbal, each one seperately. The record also features "Trance Tracks" which is a polymetrical work, interlacing rhythmic phrases of different lengths on each limb. "Like So Many Sails" is a percussion work employing a collection of wood blocks and junk metal which I somehow managed to drag all over Europe in a trunk. Closing the record is a recording of the first performance of "Dance of the Sphygmoids" from 1983 at Roulette in New York City. This record is only available in vinyl and there are very few copies left. A remixed version of "Trance Tracks" and a studio version of "Dance of the Sphygmoids" can be heard on the cd "Electro-Acoustic Solo Works 1983-94." You can now purchase this in cdr format, in a digital repackaging of this out of print LP, complete with all cover pic and info.

"Acoustic Solo Works 1983 -1994" is comprised of an overview of a very active decade of solo work for the acoustic trap set. Three works that were a part of the "Tubworks" Lp appear on this collection, including the opening track "Trance Tracks". This version is identical to the one that is on "Tubworks" except that it has been remastered with, I feel, a much better and clearer sound so that all of the details are more perceivable. "Trance Tracks 2" never was released before, it was planned as a bonus track to the cd release of "Tubworks" but in the end that never happened. Also included is the piece "Dance of the Sphygmoids" which was also on "Tubworks" but on this cd is heard in a later, faster and more intense version. "Extensions" was a work that predated the Tubworks program, one which I ceased performing as some of the techniques I can no longer reproduce. "Tyrolienne" has been a part of my solo concerts since around 1987, it culminates many of my extended techniques from this period. The cd closes with an homage to Art Blakey, "For Buhaina" that was improvised at the end of a quintet concert soon after hearing of Boo Boo's passing. (still available through this site only, very few left will not be reprinted)

I like to think of this recording of "Electro-Acoustic Solo Works 1984-95" as a collection of stories. Each piece on the collection was an extended project that developed over a year to two year's time. The media involved for each project is different. The earliar works involve analog tape in the classic "concrete" style. Despite all our advances in the digital domain I still find this methodology fresh and exciting. As strides in the technical realm of electronic music have developed, the evolution of my work in this domain reflects my changeover to live digital electronics which offer exciting possibilities for live interaction. Most of the works on the record involve some acoustic percussion as well including "Chatterlings" for midi triggered sampler and drums which is in my current repertoire. Mostly though this recording documents works I no longer perform and that were quite elaborate efforts to perform. Probably chief among them is "Aivilik Rays" which was originally an hour and fifteen minute long concert length work inspired by the Artic landscape, it's people and the peculiar history of the outside world's confrontation and manipulation of it's unique character. (still available through this site only and very few left, will not be reprinted) 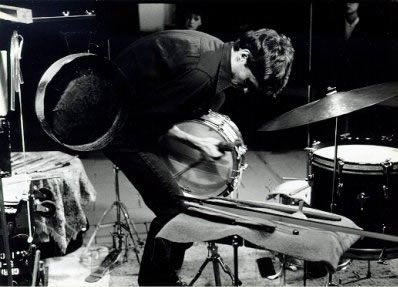 Some observations by others:

"Hemingway is an extrodinary and highly original drummer. Using mallets or his hands more frequently than sticks, and prefering arcs of rhythm to a continous beat, he shapes his solo pieces with concern for dynamic balance and thematic continuity. While Hemingway is not averse to employing unconventional techniques, in his hands the uncommon effect never becomes an end in itself."

"Like the Aivilik Eskimos, who are able to determine place and direction by sound rather than sight, Hemingway has adapted "abstract" techniques of tape manipulation to create non-programmatic sound images (i.e., not imitations of visual images) that suggest the vagaries of Nature, the three dimensionality of sculpture and a belief in ghosts. The special perspective Hemingway brings to this music, compared to that of other electronic composers, may be his experience with spontaneous creativity, and an ear trained to illuminate and elaborate upon the inner workings of sound and construction. Though not as flashy as some music in this genre, Hemingway's pieces are subtle , and seductive."

"....Gerry Hemingway, now undoubtedly one of the most stimulating percussionists on the planet." 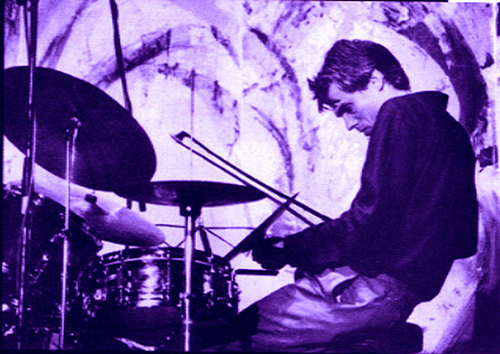