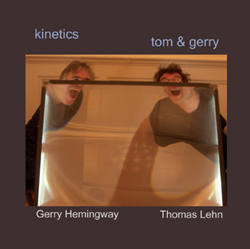 One of Hemingway’s most effective liaisons has been his duo with analogue synthesizer specialist, Thomas Lehn. Kinetics (2) is their third release. What’s most impressive about this duo is their dynamic range. While much of this hovers quite effectively aroundthe quieter end of the spectrum, it only serves to heighten the louder passages. And the apocalyptic climax to the epic (over 31 minutes, the remaining tracks are edits in the 4-10 minute range) final track with Hemingway dropping literal bombs with his drum kit is almost frightening. But through most of this Hemingway is using cymbals and smaller percussion instruments, scraping, tapping, and bowing in an acoustic counterpoint to Lehn’s alien electronic sounds. At an hour, this is a perfect distillation of what these two do. And they do it well.
Robert Iannapollo, ©Cadence Magazine October 2009

TOM & GERRY [THOMAS LEHN/GERRY HEMINGWAY] - Kinetics (Auricle 08; USA) Featuring Thomas Lehn on analogue synthesizer and Gerry Hemingway on drums & percussion. This is the third amazing CD from this particularly dynamic duo and again, they deliver the goods. The five pieces were recorded at three different in Austria (2003), Koln, Germany (2003) and in France (2006). Thomas Lehn plays an analogue synthesizer, an ancient from the 1970's that has pretty much been abandoned by most synth players. Hence his sound is quite distinctive and unique. The same can be said for Gerry, as his approach to the drums and percussion is also most distinctive. The first piece, "Patina," has Gerry bowing his cymbals while Thomas slowly provides haunting subtonic sounds. What is interesting is that often their sounds are similar in texture so that it is hard to tell who is doing which sound. I am reminded of gazing into the past, listening to static from an earlier era. Gerry often sticks to cymbals which sound perfect with the eerie sounds of Thomas' spooky synth swirls and fragments. Since this music moves slowly, we get a chance to focus on the textures as they evolve, it is consistently fascinating to listen or watch the shapes shift. All of the recordings are well done, in stereo and balanced just right. The last long piece, "Maquette" is especially wonderful, covering a great deal of dynamic ground and moving cautiously through different sections. This piece has a more futuristic vibe as if we are walking through the mysterious architecture of an unknown building and trying to figure out what we are seeing or where we are going. The mystery continues... Bruce Lee Gallanter (Downtown Music Gallery)

Kinetics makes a very persuasive case for the virtues of good recording, thoughtful post-production, and musical maturation. Which isn’t to say that Tom & Gerry’s previous efforts for Erstwhile and Umbrella were bad records; in particular, their self-titled debut presented a thrilling exchange of electronic and acoustic sounds in real time. But this one, which is on Hemingway’s own, is even better. One reason is the audio quality, which fully realizes the tactile sensation of Lehn’s analogue synthesizer playing and satisfyingly recreates the vibrations of air molecules around Hemingway’s cymbal strokes. You’ll lose some of the music if you run Kinetics via itty-bitty wires into tiny speakers; this baby demands to be played on a decent stereo system with speakers of a certain size. The same care that got the most out of self-recorded live performances also, I suspect, went into picking the right ones; there’s not a wasted second on this CD. Hemingway and Lehn sustain enormous and unwavering control throughout, even in long moments near the silence threshold. This is the duo’s quietest album; they dole out the fireworks as sparingly as a fire marshal in woodworking class. If the double-disc Tim & Gerry gave us a bit too much, this one gives us only the right stuff. Of course that stuff had to be there in the first place, and that’s where the refined attunement that comes from working together, pushing forward, and having the chops and chemistry to get where you need to go comes in.
Bill Meyer Signal to Noise (09)

In June of 1997 Thomas Lehn and Gerry Hemingway came together for a duo tour in Germany that had originally been planned as a quartet with Mats Gustafsson and Barry Guy. But the budget was meager and salvaging the tour seemed the best option and so the tour went on as a duo. Thomas recorded all of the concerts and the extensive recordings were edited into what a double CD that came out at the end of November of 1999 on Erstwhile Records. The recordings have proved so compelling that the duo toured again in the United States in March 2000. From that tour we distilled a second recording "Fire Works " released on Umbrella Recordings (DMG review and purchase) 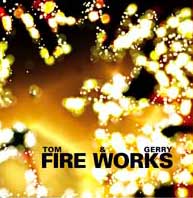 For Bookings Email Gerry Hemingway at:

For the past twenty years or so, drummer/percussionist Gerry Hemingway has shown himself to be a willing participant in any creative situation. His discography contains all sorts of unusual collaborations. But Tom & Gerry, done in collaboration with German synthesizer player Thomas Lehn is among the most unusual.

Lehn hails from Cologne and his equipment consists only of analogue synthesizers. Cologne was the center for Stockhausen's early electronic experiments so one wonders if Lehn's attraction to these now largely unused instruments stems from some early unconscious environmental experience. Was electronic music always in the air (or water) in Cologne when he was younger? Whatever the motivation, Lehn's command of these notoriously difficult instruments is impressive (even more so in concert). The thirteen tracks on this double disc are edited highlights of a tour but they all have the feel of complete entities.

There's a true communication between Lehn and Hemingway. Consequently, the group dynamic is constantly shifting. Given the instrumentation, one would expect the rhythmic and percussive impetus to come from Hemingway and the sonic elements to come from Lehn. That is not always the case. At times, Hemingway will bow his cymbals or scrape his drums, eliciting electronic sounds, and Lehn will respond with a sharp percussive attack. Both musicians take care of the textural elements of the music. Tom & Gerry is a true contemporary duet that nods to the past while being very much a part of the present (and perhaps even the future.) Robert Iannapollo, Cadence 7/00

"With the release of Erstwhile 004, Abbey provided the first substantial  (and accessible) recording of analog-synth player Thomas Lehn. Tom &  Gerry, a phenomenal pairing of the widely regarded but rarely recorded  Lehn with premier percussionist Gerry Hemingway, is an indispensable  document. Lehn, a key player in Keith Rowe's all-star Movement in Music  Electronic Orchestra (MIMEO) and an important figure among  electro-acoustic improvisers, differs from many of his contemporaries in  that he often uses the synth as a discrete instrument. Whereas other  improvisers tend to intertwine electronics and acoustics, Lehn's  instrumental voice stands apart in its disciplined yet exceptionally  expressive articulation."
Gil Gershman, Signal To Noise

"Thomas Lehn's duets with drummer Gerry Hemingway count to the most successful attempt to merge an aestethic of sound, which extends from the techno of today, into a rhythmical drive more suggestive of jazz. Hemingway's approach, informed by contemporary (new) music as well as by west-african percussion ensembles, harmonizes in a dream-like way with the crackling sounds by Lehn." Felix Klopotek, StadtRevue Koeln, April 2000 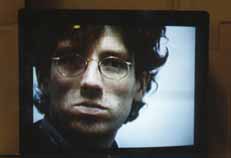 The American-German Duo of Gerry Hemingway and Thomas Lehn gave a special concert in the series "Unheard in the Neuen reformierten Kirche [New Reformed Church].  Both artists offered a program of largely improvised music that revealed significant references to the tone creations of Karlheinz Stockhausen from the 50's.  At that time, he experimented and composed on the basis of synthetic sound production with electronic tone sources.  That the possibilities of creating tones in this manner have no bounds was proven by Thomas Lehn with his analogue synthesizer.  This instrument's unbelievable spectrum of sound and static from a simple sinus tone to colorful noises made for an exciting combination with the dynamically highly sophisticated percussion performance of Gerry Hemingway.  This combination allowed both artists to build large tensioned arcs and bizarre sound structures (impulse sequences, static), which were skillfully and convincingly resolved in the end.

Both musicians complemented each other superbly, whereas on the surface Gerry Hemingway acted a little reservedly.  In contrast, Lehn "processed his analogue synthesizer as if in a rage with impressive facial play and gestures, and exactly this connection of the optic and acoustical impressions made up the appeal of this music.